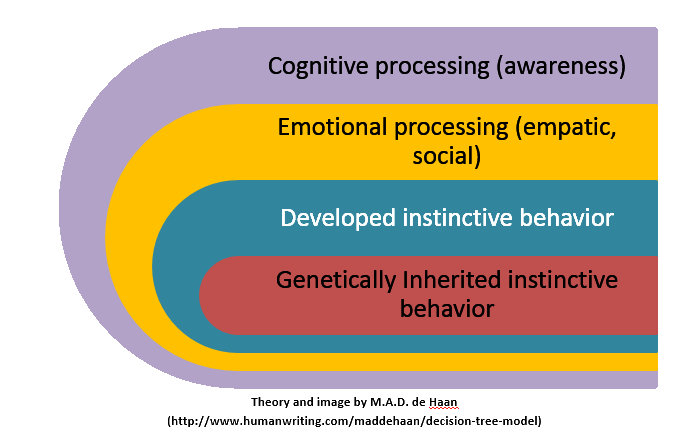 The neural response system of humans exist of the following three layers. (You might recognize something of the Triune brain in this, though I can honestly say, I didn’t know about that until I was searching for an image for this article: ‘Three layers of brain’)

The layers work accumulative, where instinctive is built up from two different influences: Genetic inheritance and developmental alteration (learning). The emotional layer is a constructed layer depending on the complexity of the organism and the amount of instinct branches. The cognitive layer depends on both underlying layers but (as we can see in different human individuals) can work independent of them.

nature. The physical economy depends on the existing concentrations of minerals within the available solution (water). This does not ends with the intestines, blood-vessels and muscle tensions of an organism, but also in more intrinsic parts and effects within the body. Even the most sophisticated patterns like our nervous system are build on these same principles.

As well as the building blocks, the development and processes of both nature, species and culture (social extension of groups of species), are based on such equal principles. This means that taking the basic evolution of a natural process, this can be translated into a process within a species, as well as into the working of a social construction.

All and every behavior that is correctly addressed, can be retraced to the most basic stimuli and responses of nature. All and every organism is in base principle primed to prevent harm to self. Instinct is based on the equivalent of fear, all the way to the first ancestral organism. In this progression, all instincts based on survival have the initial response to the digestion of food.

Be neutral not shallow

All processes in nature, as well as within organisms (if you have read the above correctly this is a no brainer for you), seek a neutral shift. This means that concentrations are diffused, levels are equalized.