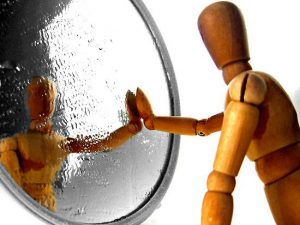 The identity is a complex combination of continuous impulses from our senses and the feedback system of our overcapacity in our brain (prefrontal cortex, temporal lobes, etc). We observe and build a reliance on the combined input from the world outside. Depending on the level of logic in cause and effect we have been taught, we are able to decide what is real and what is not. The same way a fly will move towards food with deliberation, simply because its instincts (inherited) tell it that that will give it chance on survival. Humans are little different from instinctive ancestors, we still are 80% or more instinctive. However, we do have the selfawareness that gives us the ability to question the world around us. Because at first we do not understand causality, at young age we infer our internal working on the working of the world around us. ‘Stupid chair’, ‘Yes that vase fell by itself! I didn’t push it!’. But as we learn how cause and effect works and we understand that we can logically deduct the outcome of an action, we start to recognize the ‘laws of nature’. This is how we deduct that when all senses agree with each other and what we observe doesn’t differ from the expected outcome, there is no reason to use cognitive effort to infuse different magical values. Like…wow…that door opened when I pushed it, perhaps there is a leprichaun behind it that opened it for me at exactly the same moment, even though I don’t see it and have no reason to think anyone would actually open a door without reason or corporal ability.

We accept that the world is what we see, as we know (humanity developed science to investigate beyond the physical abilities of observation) that there is more, but that which we don’t see, doesn’t differ from the working that we do see.