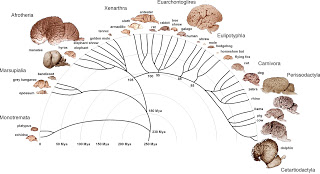 The brain is evolved from millions of years of neural synapses integrating (as said by others much like the processors we create for computers etc), when life was but worms, there were still only a few strands of nerves. A small lump in the ‘seat’. What was the ‘brain’ set to? For food. The worm is one long intestine and basically we are a intestine with vertibrates. Our brain has been evolving ever since life became multiple celltypes with specific functions. When complex animals arose, the brain was already a complex neural box. It was so intrinsic that even mice have basically selfawareness options (who says they aren’t?). But the brain still has the same function over all those millions of years: Making sure the body gains food and survives dangers in doing so. We as mammals have been on lower steps of the food chain for thousands of thousands of years. (imagine that. A life span of about 40 years and so generations every 15 to 20 years….imagine how many ancestral generations have gone before THAT point.). Then the weather changed, climate changed and we got less predators to take care of, but we still needed to find food. We ate what was in trees, bushes, die with failure, live with good food. Those choices are all embedded in the blueprint of our brain. They are the unlearned reflexes. Many of them come to pass each generation, without being triggered. And from that moment on, the brain needs less for certain type of reflexes. Eventually we are in our current era and we are the top of the food chain and we changed the ability of running from danger, to preparing for danger for many hundreds of thousands of years. Now, we don’t have to run anymore, but some of the reflexes don’t die that easily (hence religion and other fear aspects, causing diversion and anger).

We are in a time where the brain evolves on. It might become smaller, but not ‘lighter’ per se. The density changes, but also its functions ‘narrow’. Who of us still know from instinct what to do with babies? With a wild animal attacking us? With how the weather predicts the effects on crops tomorrow? We are all losing parts that are ‘irrelevant’ to the specific ‘bloodline’. Those in cities don’t know about carpenting or farming, while in the suburb there will be those that still know. Life still requires it from them to sometimes build something themselves. The same happens for many things, not just ‘job’ related, but also personal. In the country, people are welcoming to new (new blood, information, etc), but also cautious of differences (dangerous behavior, different unknown bloodlines and physical attributes). In the suburbs where all come together, it is a mediate, while in the city it is the same as in the country, but reversed. They are less welcoming (busy lives, close quarters and thus more shortlived interhuman contacts), but also less cautious. In all, the brain grows smaller, but not around the globe. There are likely locations where it grows.

It will also still depend on the activities within the bloodlines, whether there is either higher density or loss of reflex/cognitive abilities.