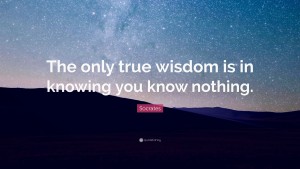 Quick base from the AoS method

We will look at the cause, effect and possible solutions to rational allergies from the perspective of the Affairs of the State primarily focuses on getting insight on the following 5 fields:

What are Rational allergies?

If there is one you should know, it is that you know nothing. ~ M. de Haan ~

Now, if you consider I said this to you, how does this make you feel? What emotion did you recognize immediately, and what rationalization popped up in your head to solve the emotional conflict?

See, even though I know why I wrote it, when I read it, and it registered,, I felt attacked. I didn’t even consider the fact that I wrote it myself, just that it talked about ‘you’, which is an indication of the person reading it. And it said that (contrasting with my logical reasoning) I knew nothing, which is generally associated with a negative quality: ignorance. I immediately had answers: The writing can not say anything about me. The writing is inconsistent with itself. You can’t know something, if you know nothing.

But is that what it says? Is that the meaning of the text? Is that the intent of the person who wrote it? (in this case me).

How can I decide which answer is right to any of the three questions? Can I deduct or induct any answer to be true in this case?

Lets pick them apart, before we continue.

Is the quote/text saying what I think it says?

What I think it says is both very relevant, and irrelevant at the same time.  It is relevant, because when I am aware that I thinkwhat it might mean, I am aware of my own processes. Being aware of yourself improves your ability to change yourself, or at the least understand yourself. This is what AoS is about. However, what I think it says is also totally irrelevant, because I can give it any meaning I want, which only has value as long as I read it, and again, if I am aware of this, the validity of this meaning is corrupted, because this meaning will be drenched in subjective historical decisions.

What could be the actual meaning of the text?

Because the text speaks about me, but inherently we know the text can be written by anyone, about anyone, I can’t take it as a personal matter, unless it was part of a larger text where it was singularly addressing me. In such case I would know the emotional load and rational argumentation behind it. But could the text even then be true? Because I already validly rationalized that the text contained an internal conflicting connection: If you know nothing, you can’t even know the one thing. Because nothing means: no thing, none.

So, the text can’t be about me specific, nor can it be read without the internal conflicting meaning. But is there a philosophical meaning to it? How do I get to such meaning?

First off, philosophy  is the study of general and fundamental problems concerning matters such as existence, knowledge, values, reason, mind, and language. This means in broader sense: objective deduction/induction by mind of rational causality within the world we live in.

Now, for the text to be philosophical, we would need to break it apart, but only after we have considered a possible reasoning for the text to exist in the first place and what field of study it would involve.

I think it would be safe to say it is about the knowledge, mind and reason of an individual in general.

So, the text wants to say something about the knowledge, reasoning and mind of an individual.

Now here is the culprit of the further investigation. I wrote the text, so I know what I mean by it. This means my explanation is already tainted with foreknowledge. Be aware of this when reading the rest and validate anything I say with your own logical mind. See where my rationality fails and please let me know.

The text speaks in two pieces:

The first piece says: ‘If there is one thing you should know’

The base here is ‘teaching’. ‘should know’, says that if you don’t know yet, you would require to remember the following. If you already do, you should learn from the following. Besides this, it says: ‘one thing’, indicating it is an important thing (though this is highly subjective).

The second piece: ‘is that you know nothing’

Conflicts with the former, as it would state you would know nothing prior to this text and would have to start with knowing nothing.

That last part of conclusion is important, because is it not true that initially a human knows nothing? Don’t we all start born with no cognitive content? Instinctive, yes, emotional, yes, but cognitive no.

The second part, also means that if you should be aware that you know nothing, you (picking back to the first) should learn from this single point. Every time you think you know something, you should consider you might not actually know.

Is that the intent of the person who wrote it?

Because I wrote the text, which is a free translation of some other quote (from Socrates), I know what I wanted to convey with it (giving it this meaning). My ‘deduction’ is validated by my knowledge of the meaning at forehand, but you might consider whether you could have rationalized to the same meaning.

Allergies in rationale (logical inclinations), or content (information of observation) pretty much always start and end with the limitation of the context (boundaries of knowledge). This isn’t per se wrong. Often we find ourselves in a conversation where someone shows on a rational level to have no content in the matter, though having presented to be knowledgeable within the context.  This will be irritating for many different reasons depending on the times and places. Important however, is to know where the irritation comes from. Sometimes it is not the other person, but ourselves who lack the information and this can be just as irritating.