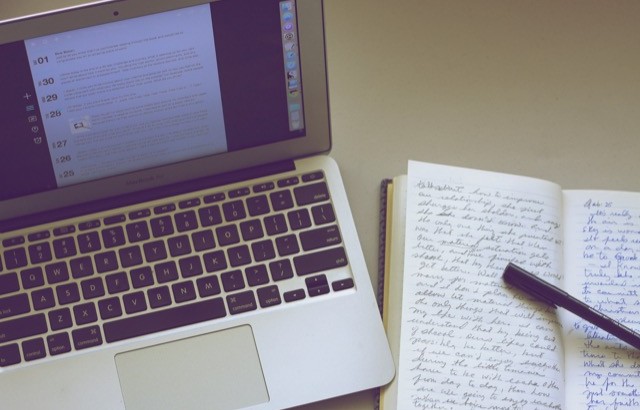 No, it isn’t about the level of writing, or about ‘illusionists’ writing their stories, but about what to write on: The writing medium.

We live in a digital age. Much of what we do either touches, are is completely stored on digital media, or even bigger: stored online.

Each generation loses a little of the knowledge from the past, but this is all part of evolution. Should we keep all we write? Should we forget things on purpose? But even more, should we forget how things were done before? Like we forgot we forged pots of clay, by baking them in burned ground? Should we forget about how we wrote on paper?

True, paper is a costly way to write. Not just because it costs ink, or paper, but rather because paper comes from nature. Paper is made from trees. Even with recycling it takes effect from oxygen generating life of nature. But why would you then, even consider writing on paper, if you want to be conscious, aware and responsible?

A strong connection, that internet

Well, did you know that the internet is like a computer that is always on? Do you know what computers need? It needs electricity. Not only that, but when too much is done on one computer, the computer becomes hot. If too many computers together get warm, they also get hot. Thus, with the internet, which is build on several skyscrapers of computers stashed together in some rooms all over the world, they need to be cooled. They need airconditioning. This means more electricity required, as supporting appliances to the actual internet. But, of course there are also people checking the computers day and night. They need food, light, and all sorts of stuff, to be able to do so. More electricity. And you know…..electricity is created in several ways: Sunlight, wind, water, coals, burning fossil fuels in general.

Writing on the wall

So….eh….It is all neat and all, but where you store your writing, doesn’t automatically change your impact on nature (if you were interested). But there is more.

While a book of paper might seem oldfashion, there is a reason why humanity first invented those, instead of the internet. They don’t cost energy to preserve. Though the internet is always available, what do you think happens if a major power outage would hit the vicinity of where your data is stored on servers? Well, basically nothing much should happen. The backup power supplies should kick in and all keeps running, but what if the power was off for a longer time. Or off at your location? You would not be able to access any data anymore.

A book remains a book. You can write it and later read it without any power or electricity required. Taken that you have enough light. The book doesn’t need anything but a dry place to be secured. This is one of the reasons I write both on the net, and on paper still.

There is another reason, a more paranoia reason to write on paper: nobody can just access it by hacking into your accounts. As we all learn about IP (Intellectual Property) and how Google, Facebook and Microsoft have prying eyes in everything, it is hard to not be paranoid when you have that idea that you think is totally unique.

But in all, I think both have pro’s and con’s. Online is easier writing or reading together with others. Something humanity will move into, if some religious sect won’t have reverted most of us back a couple of decades first. In which case my children still have some writing to read.