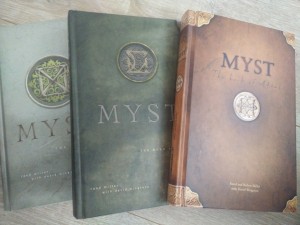 I was going through some collections while cleaning up. Suddenly my eye fell on something that I had not forgotten, but…the attention for it had waned. So? You might ask? Dump it, done, even cleaner.

Yes, cleaning up stuff you haven’t used for some time is a good thing. Nostalgia isn’t really helping in cleaning. But this was a game…or rather more than a game. And even if it had only been a game, it was an integral part of my life.

The I in write

I write, I write since I can write and am a poet since my teens or before. As drawing doesn’t come as easy to me as it does to others, I have to use words to describe a world I picture. It wasn’t until this game, that I turned my yearning for writing into a ..(I hate words connected to superstitious nonsense, but by lack of better) soul-lust. The game was Myst, or rather the whole franchise (The books, the games from Myst, Revelation, Riven, Exile, URU, Myst V and Obduction, but also the web communities, way back in the 90’s). What it did to me, was give me a sort of insight into the process of writing, without going into it actually.

The Y in Myst

In Myst, the story starts on an Island that was created by a writer. He wrote a book, and by writing it in such a way, it became a real world. No doubt Robin and Rand Miller will have thought about it from this perspective. The game is all about solving puzzles in various ways. It was the start of the genre, though I now found Cosmo and Manhole to be the precursors actually. The fact that the game was based on such profound (in my eyes as a teen) wisdom, that writing was an ability to shape a world inside one’s mind, was beyond the game of course. And it clung to me. I was Atrus (like many people at that time), I was a D’ni (I was always joking online that my third name was pronounced the same), like all the other people. Some identified with Catherine, the wife of Atrus, others with yet other characters from the stories devised later (Three books: Myst: book of Atrus, book of Ti’ana and book of D’ni are a must read. Rand and Robyn Miller together with David Wingrove).

But the revelation, or rather making the idea that thrives writers, tangible, caused me to build this dream to be able to really write such type of ages, these worlds. But of course, schools don’t immediately teach you what you dream of, rather than what you need to come by in society and the country you live in (if you are lucky).

In all, I am a writer, more because of the world of Myst. Where worlds were written and words held magical power, which metaphorically is the same way we as humanity look at it.