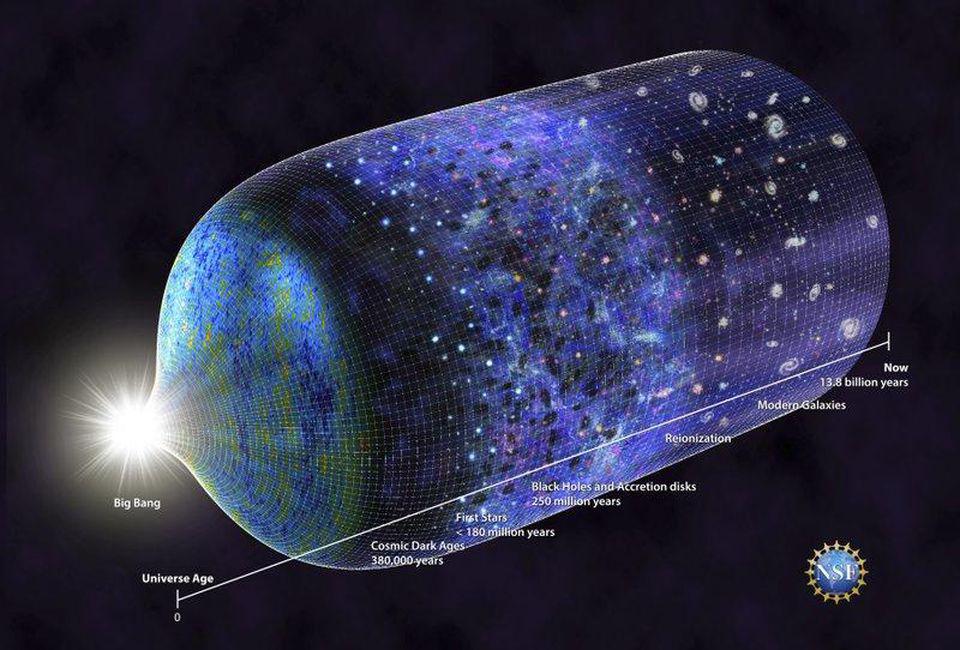 If you are interested in many different things, or even simply an astro-geek, you will likely have come across some articles of ‘ThinkBig’, like the following:

Now, when you start reading this article, it will seem like a genuine (albeit likely lengthy) breakdown of history regarding the cosmological model of the Rapid Inflation Model, also coined ‘The big bang’.

Now there are several things wrong with the article and not in the first place the drag of text just so readers will watch several advertisements. Many sites do this, even Metawareness.com. However, it becomes eerie, when arguments are internally (aka logically) contradict eachother in the text itself.

One step forward two steps back

For instance, in the second paragraph, the writer explains how extrapolating statistical data forward AND backwards in time work and how this will expalin that what science has done isn’t correct….(by using science to prove it…but not really).

‘It is tempting to go as far as possible’, well, no, it is actually required by science to question the answer, so you will ALWAYS go as far as you can go. Taking an equation and going into infinitesmal sizes and densities to get to a state that can then be questioned, is logical and correct.

‘But physically, when we looked closely enough’, active past tense, but never mind that. The scientific consensus regarding the cosmic evolution, comes from looking as closely as possible. The writer seems to forget that scientific thesis, antithesis, hypothesis and theory are not simply accepted on ‘I think this is right/wrong’. Nor is any already established causal model revoked simply because new information can be found. The new information will first be held against the already existing theories and if they fail, that means the theory needs to be adjusted. Before doing so, the new information has to provide for a clear causal connection to that theory.

Now we get to the worst part. Though the summation of a scientific timeline COULD potentially help you get a view on what would be a good propability, it doesn’t add anything here.

The ‘big bang’ is seemingly rebuked by the writer, simply by claiming that the whole road there has been littered with contradictions. And then it comes. Instead of explaining why the Rapid Inflation Model is incorrect, the writer simply asserts that when using inflation alone, you will not need any starting point and will be able to deflate on and on into history….but wasn’t that what he proposed was wrong in the first place?

That is not a theory, that’s your opinion

Now, the writer claims to be scientifically savvy, but fails to actually use the term that titles the page: Think Big.

The way a SCIENTIFIC theory works, is that it must make at least one prediction of further inquiry (this has to do with the falsification clause). The writer claims that you should look at what would be the state of the universe at 0 seconds old, but then claims that with the altered view, you could go beyond that….Here it simply becomes potato potatoes. You either are going beyond the quantum physically possible state of the universe of the state of matter under extreme high density and temperature, or you keep to the premise you held yourself in the first part of your story: You should NOT go beyond what you can measure. Can’t do both.

The answer, surprisingly, is that there’s a tremendous amount of harm — if you’re like me in considering “making unfounded, incorrect assumptions about reality” to be harmful.

Yet that is what is done in the actual text. Not only does it question the supporting theory of the cosmological evolution (which is fine if you have good reason and argument), but it even questions its own validity while claiming that the proposed view is better…that is contradictory.

Understanding that the Rapid Inflation Model IS the Big Bang theory, will help you understand that after claiming you debunk the ‘Big Bang’ theory, you should not use the (Rapid) Inflation Model as counterargument. The fact that your idea holds to the same data, except that it goes into extremes that can not be verified and are even unlikely to be possible due to the way matter and energy work under high pressure and temperature (ie. frequencies/friction).

If you claim ‘inflation’, you will have to explain from what did it inflate. Then you move back and what do we call that? Infinite regress, which is never a solution.

So, if you are like me, an avid reader of different subjects or astrophysics specifically, make sure you keep a keen eye on internal consistency of information. Especially if you are planning to use the arguments proposed in a debate or argument of your own. Understand before you know.